On Sunday, April 30, DeBows observed Native American Sunday during the worship service. Grayce performed some native American music on a modern replica of a traditional Cherokee Native American Flute. Following is an article Grayce wrote discussing this and similar instruments.

The instrument played in worship for “Native American Awareness” Sunday was a modern replica of a traditional Cherokee Native American Flute, made by Charlie Mato-Toyela, enrolled Cherokee, who operates his own company, BlueBear Flutes and has his own website online www.bluebearflutes.com selling a great variety of handcrafted instruments, original meditative music CDs, etc. He has published a book and youtube videos explaining how to make flutes. I bought the least expensive Flute he makes, carved from sawgrass, and sold as “untuned” so each is “unique.” The Flute I got plays naturally in A# pentatonic minor, an octave above singing range. By half-holing and cross fingering the Flute can play in other keys, as done in worship Sunday. The pentatonic minor key, is beautiful, ideal for meditation and improvisation, but the songs selected for Sunday, did not use this key.

Native American Flutes are unique because they have two different air chambers, separated by a plug. The air moves through a slow chamber, through an exit hole, along an air track channel, into a sounding hole then across a splitting edge. The air track channel may be either carved into the body of the Flute, or contained within a separate fetish. The fetish or sound block is tied atop the Flute to direct the air across the splitting edge. By contrast, a Recorder or Flutophone, has no internal obstruction: the air goes straight from the mouthpiece, across a cutting edge.

The Native American woodwind of South America, is the Quena, the most challenging flute to play. The Quena requires embouchure, and is played through a thin slit in the lips while pressing against the chin. The Quena is the national instrument of Perú, originally created by their indigenous people but now popular with just about everyone: in Perú, one may hear a quena playing on every street corner. While a Native American Flute typically has very little range over an octave, depending on the maker and skill of the player, a Quena plays up to three octaves. 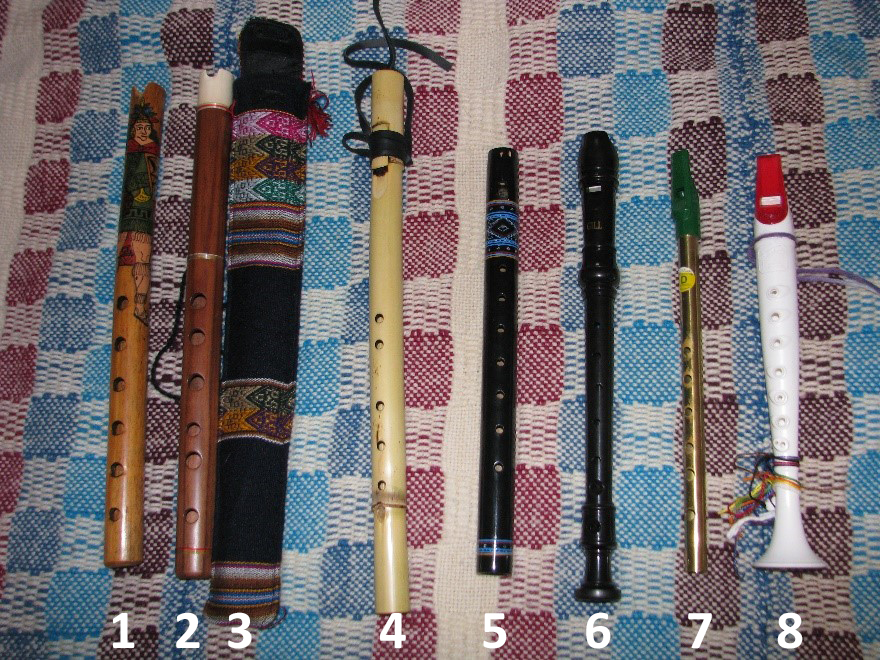 From left to right:

In modern times, the Native American Flute has been regaining popularity in America. There are many manufacturers, both native and non-native. Purchasing flutes, from indigenous artisans, supports and perpetuates ancient traditions of musicianship, craftsmanship and artistry. The instruments are soothing and healing to play, good for the body, mind, and soul. How many of the “things” we own, have a name and face of a creator, behind them? And we all know, who the creator is who created the creators: God. There is a world of difference, between a mass-produced machine made plastic instrument, and a handmade instrument, of natural renewable material. In an industrial society where mechanization, computers, robots, and electronics rule and so much of life is impersonal, codified and conformed to the point that humanity itself becomes unnecessary, replaced by machinery, it is nice to be able, to appreciate and value what mankind can do by hand with God’s help and tradition. We are all unique, and every one of these handmade flutes, is unique, is different, has its own voice, just as we as people, are all different, unique, and have our own voice. Thanks be to God! Maybe through sharing and enjoying the beautiful sound, of a handmade flute, and appreciating the myriad talents of others, we can all find peace and harmony and nature, in a world full of discord, where so many sounds are loud and harsh. The soul, longs for beauty, for emotional expression, and flutes are one way to fulfill that spiritual need, universal across all people.