You are here: Home / The 12 Days of Christmas 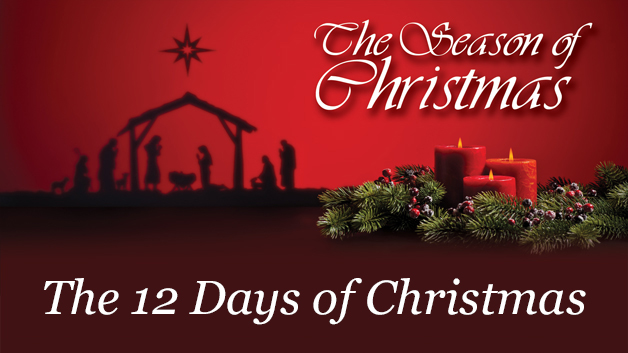 American humorist Kin Hubbard (1868 – 1930) once observed “Next to a circus there ain’t nothing that packs up and tears out faster than the Christmas spirit.” Unfortunately, many of us have experienced this firsthand. By the time Christmas Day arrives we are so tired and burned out that Christmas seems anti-climactic and devoid of much of the joy that is supposed to be associated with the season; Peace and Good Will seem hard to find.

Part of the reason for this is due to the modern secular marketing hype of the season, which largely omits the relationship and observance of the traditional Christian liturgical seasons of Advent, Christmas, and Epiphany.

The traditions of the Twelve Days of Christmas (Christmastide) have been largely forgotten in the United States. We seem to be much better at singing the song “The Twelve Days of Christmas” than observing the 12 days. Contributing factors include (but not limited to) the adoption of more secular traditions, such as the American version of Santa Claus, the rise in popularity of New Year’s Eve parties, and perhaps most significant, the Christmas marketing strategies of store retailers. For retailers, the first day of Christmas (December 25th) represents the end of the marketing season, as demonstrated by the number of “after-Christmas sales” that launch on December 26. The commercial retail calendar has fostered a false sense that the Christmas season ends on December 25th, when in fact it is just beginning.

Perhaps a quick review of the Christian liturgical seasons of Advent, Christmas and Epiphany will help us restore the joy and meaning of the season.

In the Western Christian church, Advent is the beginning of the liturgical year and begins on the forth Sunday prior to Christmas Day, December 25th and ends on Christmas Eve (December 24th).

Advent is a time of expectant waiting and preparation for the celebration of the birth of Jesus at Christmas. The word Advent comes from the Latin word adventus, meaning “coming”.

The Latin word adventus is the translation of the Greek word parousia, which commonly is used to refer to the Second Coming of Christ. Therefore, the season of Advent can anticipate the coming of Christ from two different perspectives. The season offers the opportunity to share in the ancient longing for the coming of the Messiah as well as reminding us to stay alert for his Second Coming.

The Twelve Days of Christmas (Christmastide)

The word Epiphany is from the Greek word ἐπιφάνεια, epiphaneia derives from the verb “to appear” and means “manifestation” or “appearance.”

Epiphany is observed on January 6th each year to commemorate the visit of the Magi (wise men) to see the Christ child. Many view this event as the first manifestation of Christ to the Gentiles. We will observe Epiphany Sunday during the 9:30 AM worship service on January 5th.

It is hard not to get caught up in the commercial aspects of Christmas. But if we can better observe the liturgical seasons of Advent, Christmas, and Epiphany, we may find the Christmas spirit stays with us much longer.

We just need to remember that Christmas is not about material items and artificial, self-imposed deadlines, but rather Christmas is about rekindling our relationship with God through the celebration of the birth of Jesus Christ. If we celebrate the true glory of Christmas and share it with others, we just might find that ever elusive Peace and Goodwill, not just on Christmas Day, but throughout the year.